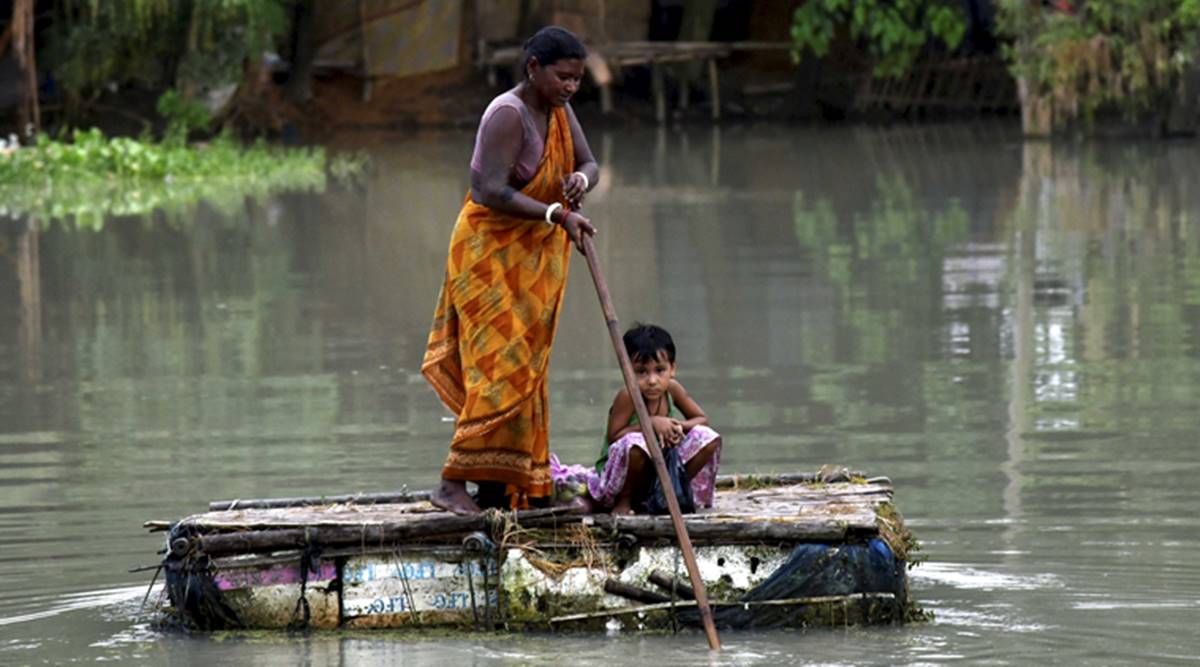 Hundreds of lives are lost due to Assam floods every year. Thousands are left homeless. Not just humans, the floods spell doom for animals in the famous Kaziranga National Park as well, destroying much of the biodiversity, including endangered species such as the one-horned rhino. This year is no different, with visuals from Assam giving glimpses of the horror unleashed on North-East India’s biggest state. This article seeks to understand the root causes of this recurring phenomenon.

Historically, Assam has been flood-prone due to its geographical proximity to the Brahmaputra river basin. As much as 40 per cent of the state’s land is prone to damage by floods, with the Brahmaputra valley accounting for nearly one-tenth of India’s total flood-prone area. Assamese society, that has now lived with this reality for several years, celebrates the abundance of river water in the state. Various folk songs are dedicated to the majestic river. Traditionally, the floodwaters would replenish crops and soil, and they were not necessarily seen as a menace. However, a combination of natural and man-made factors have made the situation different over the years. The infamous 1950 earthquake set the stage for worse floods in the decades ahead by making the Brahmaputra river more unstable, leading to greater soil erosion on its path. The quake changed the region’s topography and made the Brahmaputra valley more susceptible to deluge thereafter. According to a 2015 report published by the Assam government, steady erosion by the Brahmaputra has led to the destruction of over 3,800 square kilometres of farmland since 1954.

At the crux of the problem is the very nature of the river Brahmaputra: dynamic and unstable. The Brahmaputra features among the world’s top five rivers in terms of discharge as well as the sediment it brings. The vast amount of sediment comes from Tibet, from where the river originates. “That region is cold, arid, and lacks plantation. Glaciers melt, soil erodes, and all of it results in a highly sedimented river,” said Dhrubajyoti Borgohain, a retired chief engineer of the Brahmaputra Board, a central government body whose responsibilities include flood control in the Brahmaputra basin. By the time the river enters Assam – a state comprising primarily of floodplains and surrounded by hills on all sides – it leads to the deposit of vast amounts of this silt, which subsequently factors into erosion and floods.

Over the years, humans have always played a major role in causing destruction to nature. In Assam, despite the area being prone to flooding, people have not shied away from settling here. Efficiently clogging up the space and subsequently restricting the space for the river to flow. When rainfall is heavy with nowhere to settle, the river inadvertently wreaks havoc on everything in its path.

Unplanned development and massive construction in Guwahati, and in the absence of environment clearances, have contributed to flooding in these regions. Furthermore, in 1982, the Brahmaputra Board had suggested that dams and reservoirs be built to mitigate these floods. However, due to strong opposition by locals and environmentalists, who protested on grounds of displacement of locals and destruction of ecology, prevented such plans from attaining fruition. This led to the government to build embankments to mitigate the natural crises. However, their ineffectiveness and lack of durability have been on display more than once through the years. According to reports, most embankments built in the 1980s were not strong or viable enough to handle the intensity of water flow. Since these were meant to be temporary measures, it appears that subsequent governments were not generous in spending on high-specification embankments, leading to weak and regularly breached structures. It is common knowledge that embankments have been known to limit the flow of water, rather than safeguarding the areas beyond the embankment, thereby causing the water to flow even more fiercely. And the dams which were in fact built had been the cause of harm to many wetland forests and local water bodies, exacerbating the disaster vulnerability of the area. Therefore, it is safe to say that these measures have been more counter-productive in the long run.

Non-cooperation among the states have also led to futile attempts to solve the issue. For instance, the Brahmaputra board proposed the building of a multi-purpose dam in the present Gerukamukh site where NHPC (National Hydroelectric Power Corporation) is constructing the Subansiri Lower Hydroelectric Project. However, due to opposition by the Arunachal Pradesh government, the dam was never built. Furthermore, the Subanisiri project on which crores of rupees had already been spent was also suspended on similar grounds.

Dredging, as an engineering solution, has been proposed by many. This essentially means digging up the riverbed and making the river “deeper”. However, experts have strongly advised against this, citing environmental concerns. Furthermore, given the high silt depositing capacity of the Brahmaputra river, this may prove to be ineffective altogether. Experts believe that even if the silt is taken out this year, more silt will be deposited the following year, making the whole endeavour extremely expensive. Measures taken up till now can be categorised as ‘piecemeal’ and ‘short-term’ at best. Many questions have been raised on why the problem is not being addressed at the foundation level, and instead huge resources are employed each year to mitigate the calamity.

Over two weeks of rains and cyclone Amphan caused and triggered the excessive flooding, having killed 85 people and displaced more than 3.3 million people. Vast tracts are still underwater, with 26 of the state’s 33 districts severely affected. Rescue operations were carried out with the help of the Indian army, and ₹ 251 Crores grant-in-aid was announced from the Centre to Assam. The largest river island in the world, Majuli, and the famous Kaziranga National Park are still suffering with more than 90% of their land masses under-water. Park authorities have reported that 47 wild animals, including 1 rhino, 41 hog deer, and 3 wild boars have died due to the floods. Fears have risen over water-borne diseases such as the spread of cholera, heightening fear among locals of another disease outbreak amidst the pandemic. With this only being the first wave of flooding, there is also paranoia on the devastation subsequent waves may bring.

State planning for urban and rural development in disaster-prone regions of India needs to improve, and environmental conservation needs to become a policy priority. Thorough environment checks, environment impact assessments of all buildings, embankments, and dams are necessary prior to the commencement of their construction. The states in the Brahmaputra basin region must come together and collaborate to tackle this. Environmentalists suggest that cooperation is necessary, not only inter-state but also inter-country. Indeed, addressing the issue only in Assam when the flood strikes is only part of the solution, and a holistic solution warrants a deep understanding of the implications on the entire catchment area. This approach has been termed a “basin-wide approach”, which ideally brings all basin-sharing countries on board to deliberate on a solution. For instance, deforestation and destruction of wetlands even in China must stop.

Another suggestion has been with regards to minimising the damage caused by the floods. Known as the “flood-plain” zoning technique, which is carried out in the US. Depending on the vulnerability of the area, they are divided into categories. Accordingly, certain activities are banned on it, such as farming, construction, etc. Extensive policy research must take place to solve the issue of flood mitigation. Swift measures must be taken and activities such as deforestation, accelerated rated of land use, filling up low lying areas for the construction of buildings, reckless urban development, etc. must all be halted. Adoption of sound watershed management along with large scale afforestation, soil conservation, and land use regulation are likely to go a long way in controlling floods in Assam. A long-term vision must be adopted, and ‘fire-fighting’ measures as in the past must be shunned.