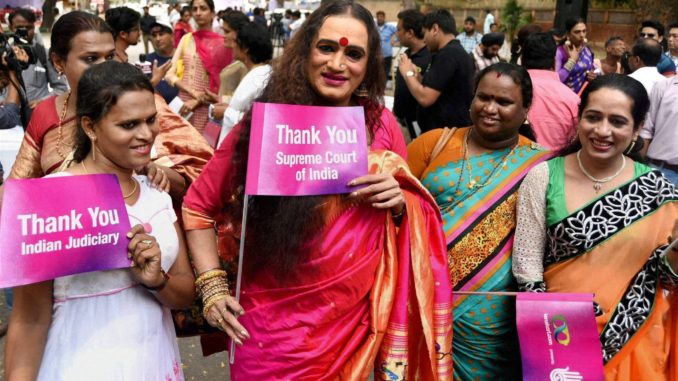 Gender identity is deeply embedded in our being. Globally, until recently, gender was viewed through the binaries of male and female. In India, the decision of the Indian Supreme Court in April 2014 in the case National Legal Services Authority (NALSA) v. the Union of India (UOI) eradicated this binary, thereby giving legal recognition to a third gender – the transgender – to live as equals without discrimination. Even though this marked a historic step in guaranteeing basic rights and liberties to the transgender community, much is left to be done to uplift them economically, social, and politically.

The Third Gender in India

A transgender person, in accordance with the Transgender Persons (Protection of Rights) Act, 2019 (Act no. 40) is ‘a person whose gender does not match with the gender assigned to that person at birth, and includes trans-man or trans-woman (whether or not such person has undergone sex reassignment surgery or hormone therapy or laser therapy or such other therapy), person with intersex variations, genderqueer and person having such socio-cultural identities as kinner, hijra[1], aravani and jogta.”

Paradoxically, ancient Indian culture supported various gender identities and sexual orientations. Historical and mythological accounts from the medieval period, including the Vedas and Manusmriti, suggest that transgenders were accepted as a part of society, and were even given positions of power. Hindu mythology suggests that when Lord Krishna was banished into the forest, he asked all men and women to leave. However, there were some that did not conform to these genders and stayed behind. Impressed by their loyalty, Lord Krishna granted them the power to bless people (which is still believed to be true; Michelraj, 2015).

Even during the Mughal era, members of the transgender community were trusted political advisors to rulers. However, with the advent of the British Raj, the situation changed drastically in India. Hijras, to whom the British mostly referred as eunuchs, were relegated to being social outsiders. In fact, the British introduced the Criminal Tribes Act of 1871 through which people from the transgender community were naturally considered to be criminals, even in the absence of actual proof of crime. They were prohibited from making a will, being a guardian to minors, and did not have the right to adopt children. They were prohibited from dancing or playing music, and there were restrictions on the kinds of clothing they could wear (Narain, 2009). This Act was later repealed in 1952 in Independent India, but the stigma associated with the transgender community continued.

According to the Census of 2011, India has a transgender population of about 487,000 people. This numbers has increased over the past few years, but laws to promote their socioeconomic interests remain non-existent. Members of the transgender community have constantly been victims of violence, hate, and discrimination. They have been denied equal economic opportunities and healthcare, and have yet not been integrated into the Indian society adequately. Unfortunately, this has pushed several members of the transgender community into begging and prostitution. This discrimination and the lack of opportunities pushed them to the only source of job that they could easily get, begging and sex work. The cost of sex reassignment surgery is too high for most transgenders, and therefore, they end up living trapped in a gender they do not conform with, a phenomenon known as gender dysphoria (Rajkumar, 2019).

Notwithstanding a handful of success stories, such as Manabi Bandyopadhyay, who became the first transgender person in 2015 to become the Principal of an academic institution in India (Krishanagar’s Women’s College, West Bengal), progress on improving the socioeconomic standing of transgenders remains excruciatingly slow.

The most crucial success in the long battle led by activists and the community for transgender rights came about on the April 15, 2014 in the NALSA v. UOI case by which the Indian Supreme Court gave legal recognition to transgenders. In the judgement, the Court affirmed the right of life, equality, and liberty, as enshrined in the Indian Constitution.

The order issued by the Court stated that the transgender community shall be treated as the third gender henceforth, and upheld the rights granted to them under Part III of the Indian Constitution. It stated that they shall be considered as a socially and economically backward class and shall receive the benefit of all such reservations. It also directed the Central and State governments to set up HIV centres for them. The order directed governments to raise awareness and ensure that the transgender people do not suffer due to stigma, social exclusion, discrimination and/or gender dysphoria[2].

The Transgender Persons (Protection of Rights) Bill, 2019, was introduced in the Lok Sabha on July 19, 2019 by Mr. Thaawarchand Gehlot, the then Minister for Social Justice and Empowerment. It was passed by the Rajya Sabha on November 26, 2019, and received the assent of the president on December 5, 2019. The Transgender Persons (Protection of Rights) Act, 2019 was supposed to safeguard the rights and wellbeing of transgender people.

The Act prohibits discrimination against transgender persons in education, employment, travel, and healthcare. The next section of the Act talks about the recognition of transgenders. According to this, a transgender person, in order to choose his/her gender identity, has to acquire a certificate from the district magistrate (DM). The Act also states that trans people shall be provided with the necessary healthcare and therapy facilities, and that they should be able to receive hormonal therapy counselling before and after sex reassignment surgery. It also talks about a comprehensive insurance coverage for this.

The Preamble of the Indian Constitution enshrines values such as justice, equality, and fairness of status and opportunity. Transgender people who are just as much the citizens of India as anybody else, were denied these values upon Independence. Over the years, laws have been designed and implemented to safeguard their interests. However, much needs to be done to trult assimilate them into the mainstream, and uplift them socially and economically. Even today many of them have to live in a body that they do not identify with, trapped and because of the lack of support of the society or the law that is supposed to protect them. The NALSA judgement of 2014 gave transgenders the right to be recognised, and the Act of 2019 further protected their rights. However, we are still only scratching the surface.

[1] Hijra is a person whose birth sex is male but who identifies as female or as neither male nor female, a term used mainly in the Indian subcontinent.