Combustion of coal in thermal power plants generates fly ash – fine particles of burned fuel emitted from boilers. Fly ash is known to cause groundwater pollution. Due to its light-weight, it can become airborne and cause air pollution. Since heavy metals in coal do not burn, their concentration in fly ash increases to ten times that in the original coal (United States Geological Survey, 1997). Disposal of fly ash also requires large quantities of land, water, and energy. In fact, more than 65,000 acres of land in India is occupied by ash ponds (Raja, Manisekar, & Manikandan, 2013).

In India, this problem is further complicated due to the presence of low-grade coal. Ash content in Indian coal is 30-45 percent compared to 10-15 percent in imported coal (Central Electricity Authority, 2018). Thus, fly ash presents a major land usage, health, and environmental challenge.

Nearly 78 percent of Haryana’s total installed power generation capacity is thermal of which 92 percent is coal-based (Central Electricity Authority, 2018). In the first half of 2017-18, Haryana produced 9.6 lakh tonnes of fly ash (Central Electricity Authority, 2018). This is comparable to the total cotton production in the same period in the state. Thus, fly ash management is a formidable challenge for the government. 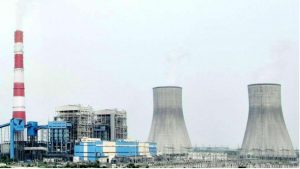 In recent years, there has been a shift in outlook on fly ash. Instead of being viewed as a waste material, it has emerged as a resource material in various industries.

In this note, we begin by examining various technologies that use fly ash as a resource material. This is followed by a snapshot of government efforts towards the sustainable use of fly ash. In the end, we examine a list of recommendations by Central Electricity Authority that could help develop Haryana as the model state for fly ash utilisation (FAU).

Fly Ash Technology and its Applications

Therefore, fly ash has a wide range of applications. This has driven both central government and state government in Haryana to monitor fly ash emissions and direct them to suitable industries.

Existing Efforts Towards Fly Ash Utilisation in India and Haryana

In the first half of 2017-18, India produced nearly 8.5 crore tonnes of fly ash. This is nearly twice the amount of steel produced in the country in the same period. 60 percent of this fly ash was utilised (Central Electricity Authority, 2018). Only 43.5 percent of thermal power stations in the country showed FAU of more than 90%.  Figure 2 shows major modes of FAU in the first half of 2017-18 throughout the country (Central Electricity Authority, 2018). Cement production is the most important avenue for fly ash followed by reclamation work, bricks and tiles manufacture and mine filling.

A central government notification issued in 2009 prescribed targets of FAU in a phased manner for all coal or lignite based thermal power stations (ibid.). The target is to achieve 100 percent FAU in the country. Various measures have been taken by the central government in this regard.

Haryana has been one of the frontrunners in FAU in India. It has achieved 100 percent FAU as prescribed by the central government notification of 2009 (Central Electricity Authority, 2018). By the first half of 2017-18, the state had achieved an FAU level of 104 percent. This means the state used more fly ash than was produced by its thermal power plants. The Panipat thermal power station has exceeded its target and achieved a 133 percent FAU level. The Hisar thermal power station has achieved a FAU level of 86.5 percent (ibid.). Thus, Haryana’s performance in FAU has been impressive. 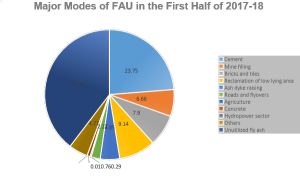 Along with Delhi and Rajasthan, Haryana is one of the three states that has achieved its target of 100 percent FAU. Successive governments in Haryana have implemented policies for fly ash collection at power plants and its usage in construction. However, there exists a significant scope for improvement in the diversity of its applications. According to Ash Track, 99 percent of fly ash in Haryana is used in cement manufacture (Ash Track, 2018). Use of fly ash in road construction, brick manufacture and reclamation work is negligible. Haryana must take up research in geopolymers as well as usage of fly ash for soil stabilisation. In its report on FAU, the Central Electricity Authority has given a list of recommendations on efficient fly ash use (Central Electricity Authority, 2018). These recommendations are summarised below.

The state government in Haryana must pursue these recommendations in order to achieve better and more efficient use of fly ash. This could be instrumental in establishing Haryana as the model state for FAU. As the energy needs of the state increase, a push towards renewable sources is necessary while minimizing the impact of non-renewable sources of energy. Efficient fly ash utilization is an excellent way to achieve the latter.