No amount of symbolic sweeping of roads by people is enough to address the environment and health crisis of unmanaged waste in India. The garbage so collected is simply dumped at a different place. A recent Supreme Court (SC) judgment (In Re: Outrage as Parents End Life after Child’s Dengue, 2017) noted that the crisis of unmanaged garbage dumps was a severe challenge that most states have ignored.

Swachh Bharat Mission (SBM) aims to provide sustainable solid waste management (SWM) to 80% of the urban population in India. In pursuance of this objective, the Municipal Soild Waste Management (MSWM) 2016 rules were promulgated at the Centre, and around 50% of the SBM budget allocated for this. Yet, the problem subsists, and in fact worsens, as the rate of urbanisation increases, with more than ten states processing less than 10% of the waste they collect (Khan, 2018). MSWM is a key element towards sustainable metropolitan development, comprising segregation, storage, collection, relocation, carry-age, processing, and disposal of solid waste in order to minimise its adverse impact on the environment (Joshi & Sirajuddin, 2016).

Recently, Haryana as well as several other states notified their state policy on the strategy on SWM to comply with the SC directive In Re: Outrage as Parents end life after Child’s Dengue (Government of Haryana, 2018). This article attempts to:

Presently, 81 local bodies in Haryana produce 4,500 tons of waste per day (Government of Haryana, 2018). Haryana processes less than 6% of the total waste generated. Most of the garbage collected is dumped on empty fields and grounds. Some of the common concerns with dumping garbage in the open are:

As the quantity of garbage produced bludgeons, the lack of proper planning in its collection and disposal exacerbates an already looming health and environmental crisis.

The solid waste production in Haryana is estimated to increase to 7,500 tons/day by 2035, according to government statistics (Government of Haryana, 2018). In light of this, the existing infrastructure in Haryana is equipped to tackle approximately 450 tons/day (ibid.). This means that the present infrastructure can handle only 5% of estimated waste generated in the coming decade. This creates an urgent need to provide a sustainable multi-agency framework to handle municipal solid waste.

Recognising the need for a regulatory framework to handle the problem scientifically, the Ministry of Environment, Forests, and Climate Change (MoEFCC) issued the MSWM Rules, 2000. Recently, a new set of rules were introduced in the MSWM Rules, 2016. In the present article, the rules are discussed in context to Haryana with reference to the collection and handling of waste.

The Haryana government recently issued the State Policy and Strategy on SWM to comply with the MSWM Rules 2016 (Government of Haryana, 2018). A snapshot of this is seen below: 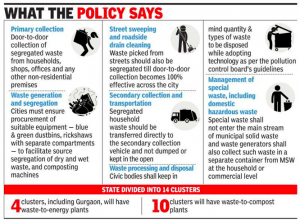 The important administrative principles of the policy have been summarised in the table below:

The next section describes the implementation challenges identified with Haryana’s MSWM Policy.

1.Lack of Political and Administrative Will

There is limited clarity timelines that the ULBs have to comply with under the State Policy. This is in clear violation of the Central MSWM Rules 2016, which provide a proper timeframe within which to implementation the Rules, under Rule 22 of the Policy (Government of India, 2016).

According to the Rules, within two years of the notification of the Rules, segregated waste has to be collected door to door (Government of India, 2016). Clearly, such deadlines have been missed by the Haryana government. These rules are mandatory and clearly to be implemented without any exception. In absence of a timeline, the incentives or motivations of ULBs stay exactly the same, as they were under the old system.

3.No Mechanisms to Deal with Existing Solid Waste

As the government continues to miss various deadlines for installing a suitable waste management programme for the state, the amount of existing untreated waste is increasing. Yet, there is no mention in the policy for handling this waste.

4.Funding and Performance of ULBs

Although the SBM has a budgetary allocation for SWM, the allocation of funds from this segment has been abysmal. In 2014-15, only 4% of the allocated fund was sanctioned for use. The sanctioned budget expenditure has never been higher than 13% of the total annual budget allocated to SWM. (Khan, 2018)

There are two plausible explanations for such severe under-utilisation:

Given the preceding discussion on the scale of the problem, there is little doubt about the severity and urgency of the problem. In the absence of adequate checks and balances, the policy, albeit well designed, is merely an ink-on-paper approach to solving the real challenge of sustainable SWM.

Undoubtedly in the case of SWM, as with healthcare, prevention is better than cure, in that reducing the amount of solid waste generated is an effort worth pursuing. However, the focus of this article was to analyse existing efforts to disposal of solid waste, once produced. In particular, it reviewed the MSWM Policy of Haryana, 2018, and showed how it is largely a policy implementation challenge. Given the plethora of social and economic challenges Haryana and India face today, arguably, SWM does not figure as a top priority among policymakers, perhaps explaining the evident lethargy and lack of will in implementing policy. However, given the rapid rate of population growth and its increasing demands on urbanisation, political will in this sphere needs to be created through appropriate carrot and stick mechanisms. Indeed, addressing solid waste disposal is not a wasteful idea!